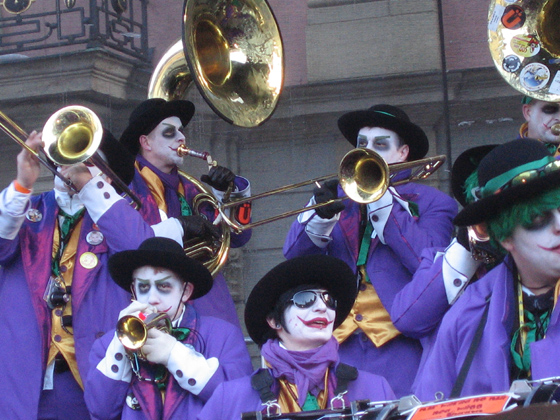 Schwäbisch Gmünd is a small town in the Rems valley east of Stuttgart, relatively unimportant nowadays. Until 1803, however, it was a free imperial city. Its old public buildings still show the pride and ambition that goes with this status.
Once per year Schwäbisch Gmünd is ruled by brass and drums played by people in strange masks and vestments. During the annual Guggemusik festival, some 20 top class Gugge bands from near and far play on stage and in the streets. They will smash the ear drums of any 'serious' musician but it is just... gorgeous.

What I said above about Guggemusik is only partly true for these ambitious, semi-professional bands. Their music may sound messy and coincidental but is in fact well practised and rehearsed. To give you a better impression there should be videos here, but I don’t have an account to upload them, sorry. 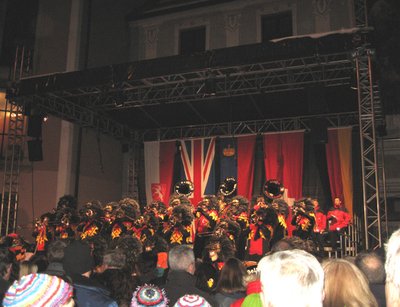 The annual Guggemusik festival takes place in the squares of Schwäbisch Gmünd on one weekend before carnival, usually in late January or early February – check the town's website for the exact date, it will be published a couple of weeks earlier. The festival begins on Friday evening with the Guggenball (tickets needed). Saturday is the best day for visitors. In the morning the Narrenbaum (jester tree) is erected in front of the town hall. After the official reception by the mayor, the 20 participating bands will play all afternoon on the stages in Marktplatz and Johannisplatz and also in the streets and pubs. At 6 p.m. the Monster Concert begins on both stages. On Sunday, the main event takes place inside the sports hall in Katharinenstraße: the Guggemusikfrühschoppen with all the bands and a lot of music, noise and drinking till late afternoon (entrance fee). 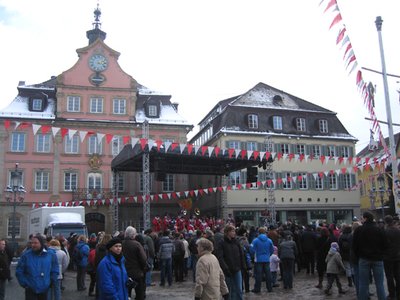 During the afternoon of Saturday, the two stages in Marktplatz and Johannisplatz are busy non-stop. The bands march in from the right, play a couple of songs on stage, then leave to the left while the next band is already waiting on the other side. 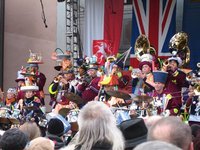 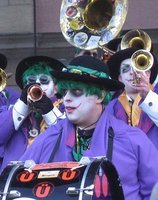 Two bands from Schwäbisch Gmünd participated in the Guggemusik festival: Gassapfetza ("Alley Smashers") and Überdruck ("overpression"). I assume that these groups were also involved with the organization of the festival. As locals they had their fans in the crowd and put on a big show. Their music is as flamboyant as the colour... These bands are N-O-I-S-Y... I was standing front and center next to the stage, which was great for taking photos and video but hard labour for my eardrums. 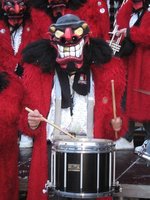 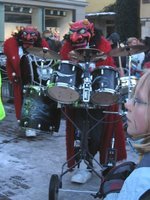 Tschäddärä (name untranslatable) is a band form Lörrach, situated on the German side of the Rhine but very close to Basel. They showed up as devilish gangsters. Their conductor has angel's wings on his back but otherwise does not look too angelic either...
Drums and percussion are mounted on little two-wheeled carts which are connected with the player's belt so that he pushes the cart when walking and has the hands free for drumming. 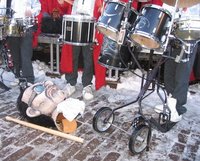 After the intro piece conductor and musicians take their heads off. It's easier for them to move and play without, although not as impressive for the spectators. At the end of the show the heads are put on again. 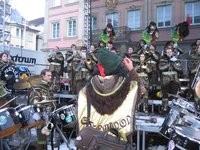 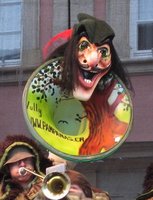 Despite their Robin Hood outfit, Les Pampana's are not from Sherwood Forest but from Cudrefin in the French speaking part of Switzerland. 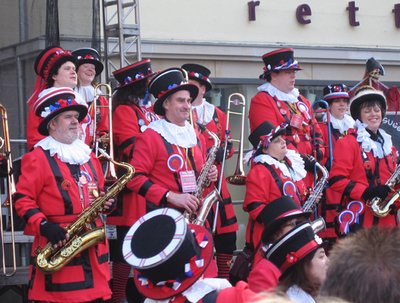 Guggemusik is even known in Britain! The fancy musical Beefeaters of Frumptarn Barnsley Guggenband from Barnsley, UK

The Mühlbach-Bazis from Eggingen had the most imaginative masks and dresses. Afterwards I learned that they in fact won the prize for the best outfit at the festival! 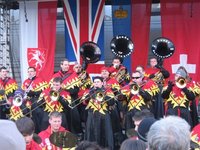 Rondo Bellinziano have used and italianized the name of their home town: noooo... they are from Bad Bellingen in the south of Baden, not far from Basel.
To me, they had the best sound of all the bands I listened to that day.

Saubachgugga is a small, probably local band of about 10 or 12 musicians. They were not part of the official programme and did not get a space on stage. They simply came and played in the streets to be there and participate in the fun, and they were not the only ones. 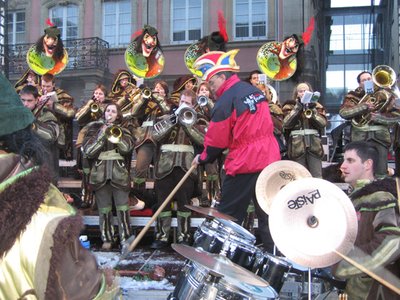 "Kehrwoch'" - A Swabian Virtue
We even observe one of the most cherished Swabian virtues: "Kehrwoch'" refers to the weekly cleaning duty, which takes turns among the inhabitants of a house. It is a Swabian custom which is taken very seriously. On Saturday, the alley has to be swept no matter what. This applies under all circumstances, even if it concerns a stage where a band of 30 Gugge musicians is playing right now...
(Seriously, he was cleaning the stage because it was full of muddy snow and thus dangerously slippery.) 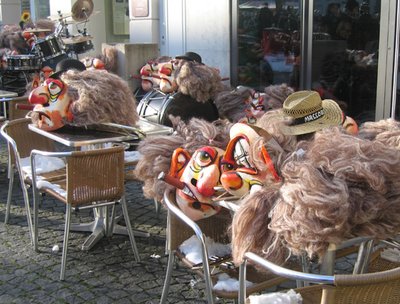 Still Life Off Stage
Photographers, have your cameras ready if you come across a band who are having a break and have dumped their masks and instruments outside a pub. You may discover one or the other fantastic unintended still life. (Don't touch anything, though.) Here is a collection of my favouriste shots. 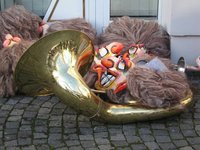 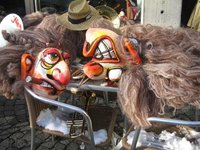 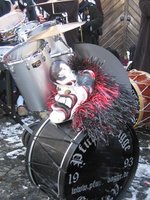 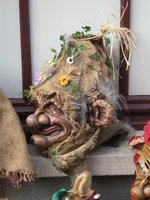