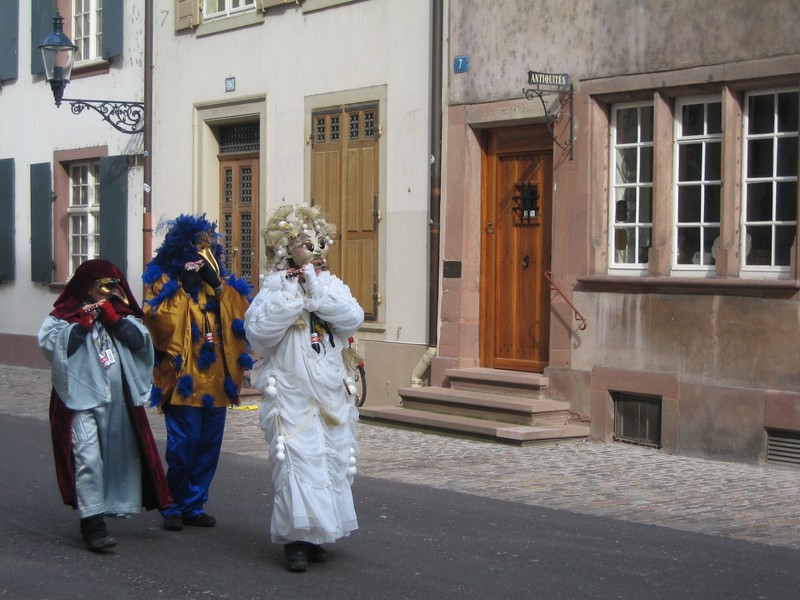 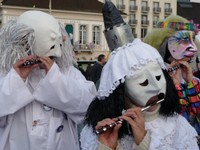 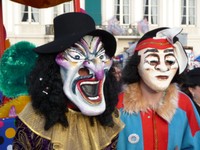 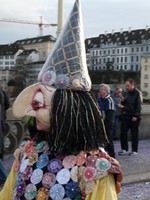 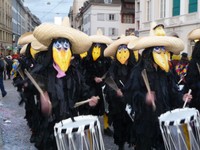 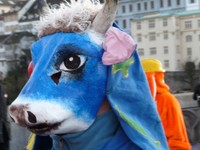 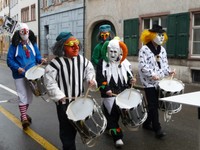 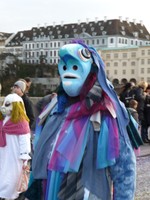 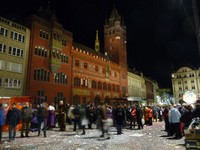 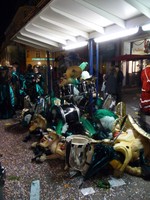 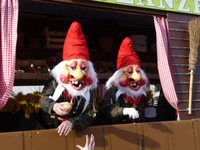 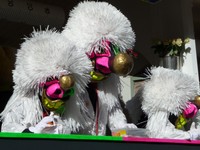 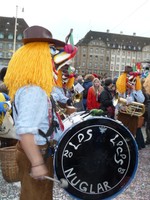 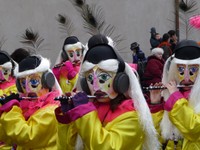 Basel is the No. 1 place for Fastnacht-type carnival which is worldwide known. In Basel they spell it “Fasnacht” without the T, by the way. Basel is absolutely unique.

Their most famous event is the Morgestraich, the starting ceremony on Monday morning at 4 a.m. But there is more going on during the “three most beautiful days of the year”. Monday and Wednesday afternoon see the two big Cortège parades that tour on acircular route through the city centre and Kleinbasel for at least three hours. Monday night belong to the Schnitzelbängg and their sung presentations of current events in politics and society. Tuesday is the day of the children and the Guggemusik bands. The latter are performing in the evening on three open-air stages at the Monschterkonzert. 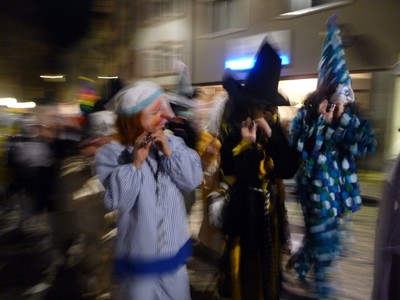 These are the official events. But there is always something going on. Basel does not sleep for those 72 hours. Cliquen and bands, small groups and individual people roam the streets day and night with pipes and/or drums or full Guggemusik equipment.

I have been to Basel a couple of times during Fasnacht, usually just for the day to see one of the Cortèges. There are special trains during the night of Morgestraich from all directions, so that would be doable from Karlsruhe, but I always found the prospect too stressful. 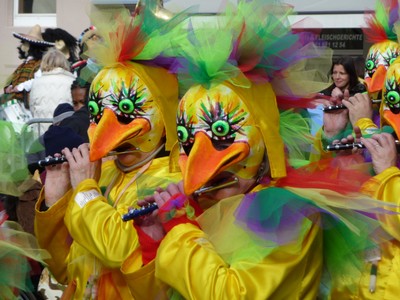 One year, though, I booked myself a hotel room for the entire three days in order to see it all. I booked already in September. Choice was already limited, but I managed to find an affordable hotel, a bit shabby but conveniently located in Kleinbasel between Claraplatz and Mustermesse. The Cortèges passed more or less underneath my window.

Having everything within walking distance was an advantage. Basel’s public transport is well organized to bring the masses of spectators to where the action happens, nevertheless I was glad to have a heated room to rest and warm up, and my private WC at hand any time.

Then later, I went again together with some other fellow members of our Soroptimist Club: Our Swiss link club organized a visit to the Chienbäse parade in Liestal as well as Morgestraich in Basel, including a hotel in central Basel.

The diversity of activities, as well as the gigantic number of photos that I have, require splitting up my report on Basel into a series of half a dozen blog entries. Stay tuned… 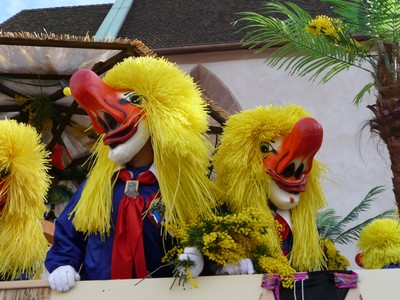 Fasnacht in Basel takes place one week later than everywhere else. How come? The explanation is a simple bit of maths.

The Lent’s duration is, in accordance with biblical fasting periods, 40 days, cpunting backwards from Easter Sunday. In the current calendar, though, it lasts seven weeks. Now do your maths.

40 days and 7 weeks, that does not match. It used to be exactly 40 days, but at some point the Roman Catholic church decided that the Sundays should not be counted as fasting days any more. 40 days plus six Sundays, that leads to the current date of Ash Wednesday as it is observed almost everywhere.

Almost. Basel, however, and other parts of Northern Switzerland have stuck with the “old” carnival date to this very day.

A big advantage for us “Fas(t)nacht tourists”: We can visit other places first and still go to Basel one week later. 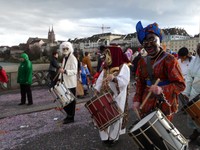 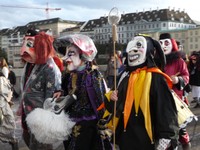 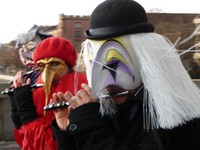 Sunday: The Day of Anticipation 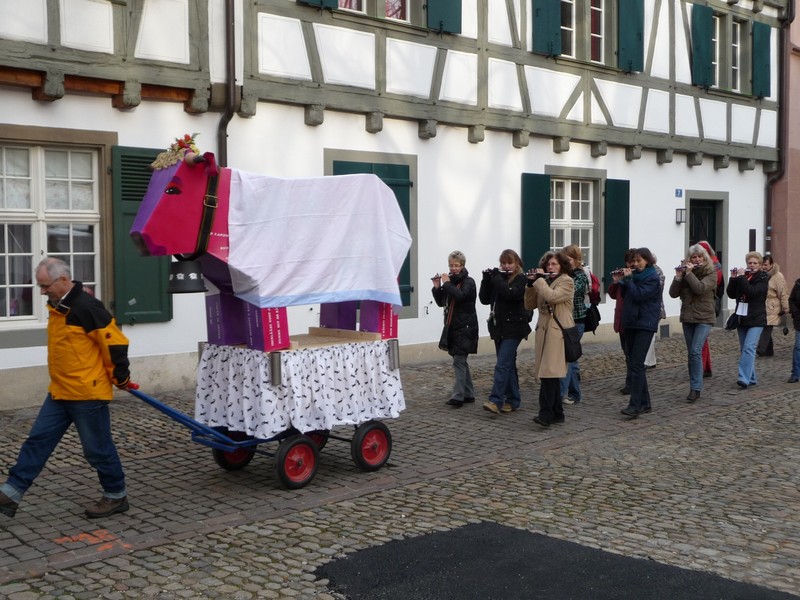 A local from Basel once wrote, “On that Sunday we are like children on the day before Christmas.” Everyone is waiting for the morning of all mornings. The last preparations are being done, and the atmosphere is full of anticipation. Most shop windows are decorated with Fasnacht themes. The first shrill sounds of piccolo flutes can be heard in the streets. 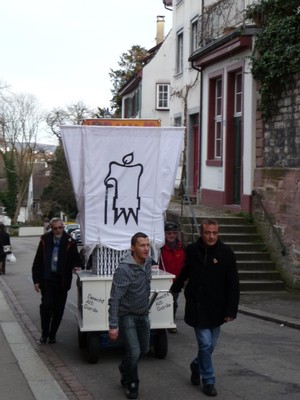 On Sunday in the late afternoon, before nightfall, the Cliques bring their lanterns to their chosen starting point for Morgestraich. When I arrived by train and walked into the city, I saw several such groups. The lanterns are still hidden under linen covers, lights turned off. Until the next morning the themes and images are kept secret, although the shape and protruding unveiled parts allow assumptions.

The lanterns are accompanied by an escort of marching pipers. On Sunday, it’s piccolo flutes only, no drums yet. This is called Yypfyffe, “Piping in the lanterns”. Participants do not yet wear any masks or fancy dress but everyday streetwear.

I had an appointment that night. Through the Tripadvisor forum(!) I had established contact with a member from Basel who is active in the Fasnacht herself. She and her husband take part in one of those many, many smallish groups which are lovingly nicknamed Schyssdräggziiglli. They have no lantern to bring into town, but they cultivate their tradition to meet at the eve of Morgestraich to play their flutes and “pipe in” Fasnacht. They very kindly invited me to come to their house and join the party.

These people were living in the suburb of St Alban right on the river bank. They have a roof terrace with a terrific view of the river and the old town panorama with Münster church. Impressed, I asked them, how does one find such an apartment. They said that their search had lasted seven years, but they had absolutely wanted to live on the Rhine bank.

Piccolo flutes are tiny instruments. But I assure you that 15 or so of them played inside a relatively small living room create a noise that cuts everyone’s eardrums to pieces!

I have taken pictures that night but please understand that I am hesitating to publish photos of someone's private living room.

This sounds like a wonderful event, or rather series of events, to attend and I am looking forward to reading all about it in your subsequent blogs