The Fastnacht has its own 'scientific' terms which derive from the regional dialect and are mostly untranslatable. I am using some of these and when visiting a Fastnacht location you will also come across them. So here is a little dictionary.

Häs: The entire costume of the jester from head to toe. Each guild decides about the Häs all its members wear. You have to be member or guest of the guild to wear it.
Larve: The mask. In some parts of the Neckar valley also called "Scheme". Besides the most common woodcarved masks, there are also masks made of textile, paper-mâché and (rare) wire gauze.
Narrenzunft: Jester guild.
Narrenrat: Guild council, usually 11 members of the guild, with the Zunftmeister as president.
Rollen and Schellen: Bells, big or small, that are worn by certain types of jesters on belts round the body.
Blätzle, Spättle, Fleckle: Small pieces of fabric, usually cut in the shape of shingles or triangles, that are sewn on a garment and cover the whole Häs. 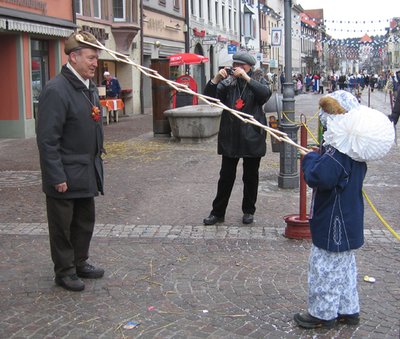 Streckschere in action
Streckschere: folding wooden scissors that can be extended several metres and serve for grabbing unsuspecting spectators' hats, for example.
Saublodere: Pigs' bladders (real ones!!!) filled with air like a balloon.
Narrensprung: a) regional term for Fastnacht parades, b) the pole jump performed by Federahannes in Rottweil.
Hemdglunker: Parades or street parties in long white nightshirts and nightcaps, usually on Greasy Thursday as the beginning of the High Days.
Wecken: Waking of the town at the crack of dawn by bands who make more noise than music.
Guggemusik: A kind of music performed by amateur bands, usually brass and percussion, that will tear the ears of every serious musician apart but is big fun to everyone else. „Gugge“ actually means „plastic or paper bag“. 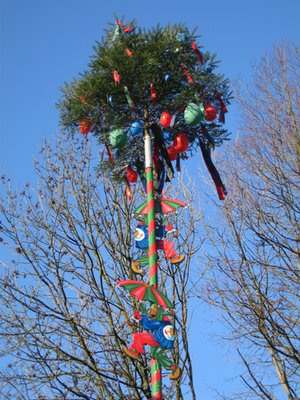 Narrenbaum
Narrenbaum: A long pole with a fir tree at the top, decorated with ribbons and similar, that is put up in a central square of the town or village during the High Days to show that Fastnacht rules.
Narrentreffen: meetings of jester guilds. These take place about every weekend between January 6 and the High Days. The different Fastnacht associations usually organize a big meeting once a year. Guilds that celebrate an anniversary (or just think it's a good idea without any particular reason) invite other guilds and hold a meeting. A big parade is an essential part of each meeting. These are worth seeing because you'll get to see many, many different guilds from the whole region that normally don't to their activities together. 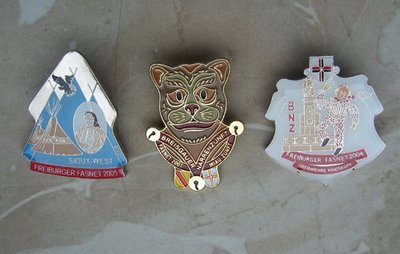 Narrenzeichen from Freiburg
Narrenzeichen: A little badge which is sold to the spectators at parades. The income supports the guild’s activities during Fastnacht and throughout the year. Some places force everyone to buy the badge as entrance fee, others keep it voluntary. It is good manners to buy the Narrenzeichen, though. Grt one, they don‘t cost much, you support the hosting guild AND you get a unique little souvenir. Many people even collect these badges.

Posted by Kathrin_E 18:18 Archived in Germany