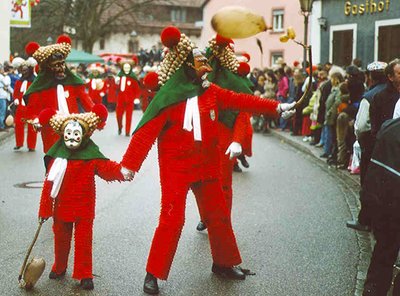 The Alemannic Fasnet is no theater performance, the spectators are part of the event and will not necessarily be treated gently, no matter if they are locals or tourists! From being dusted or brushed to hits with pig's bladders, confetti attacks, having your faces painted or being caught in a net, there is a wide variety of mischief unsuspecting visitors may be confronted with. You may also be forced to recite or sing verses in local dialect. 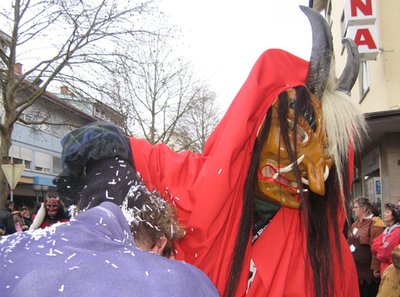 All this is supposed to be harmless fun. Some guys, however, show a nasty sense of humour... Just in case: Most guilds provide each of their members with an individual number that is worn on the Häs, so if someone really does wrong he or she can be identified by that number.

Regional customs vary widely. While in Rottweil or Villingen the worst that can happen to you is being dusted or brushed, in Elzach you are facing hard hits with (real, smeary, stinky) pig's bladders.

Scariest and unforgettable story that happened to me is this:
I was watching the parade in Oberwinden together with my (then) boyfriend. I was standing in the front row, camera ready, when I felt two hands tenderly resting on my shoulders. Well, I thought that was boyfriend who was standing behind me so didn't react, just smiled. The hands tightened their grip a little. From the corner of my eyes I noticed that something was wrong. Guy hadn't been wearing black gloves, erm... he hadn't been wearing a grey furry jacket either... Then a devil's face appeared above my left shoulder! *Scream* (Big laugh for everybody else... Devil was nice, though, and didn't take me along.)

If you love being in the middle of action, you may ignore the following. Not everyone does, though, and not everyone enjoys being made fun of. 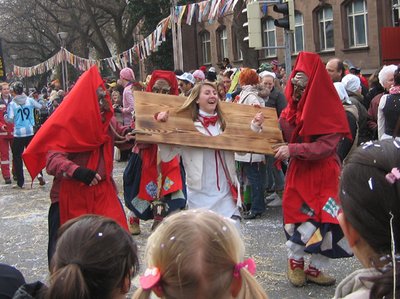 So here are a few 'survival tips' for scared first-timers: 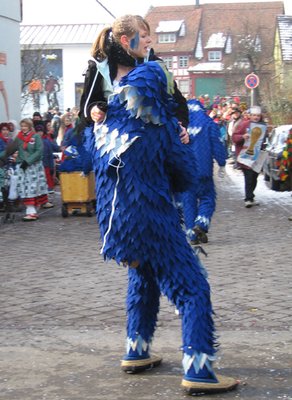 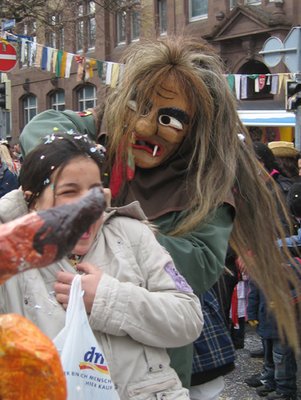 Posted by Kathrin_E 18:09 Archived in Germany