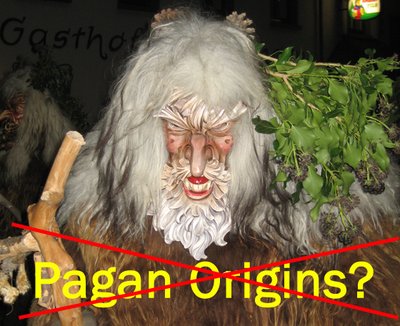 Rumours are still alive and popular nowadays that the Alemannic Fastnacht originates in pagan Germanic festivals and has to do with driving out the winter and the evil spirits.

This is PLAIN RUBBISH.

Sadly, even some guilds are still telling this fairytale. Historians have long proved this theory wrong and unveiled its background. Fastnacht, as the name suggests, is connected to the Christian calendar and the Lent (German: Fastenzeit). Its origins are entirely Christian.

Before the Lent with its food restrictions, all perishable animal products like meat, eggs, butter, lard had to be consumed. This resulted in feasts, which involved dance and fun and noise and drinking and dressing up and playing mischief. The catholic church tolerated the carnival and provided a theological interpretation: The jester or fool is the one who abandons and ignores God, thus connected with the devil. See psalm 53,1: "The fool says in his heart, 'There is no God.'"

The powers of evil are allowed to come to life for a very limited period, those few days before the Lent. The Lent, however, is a period of repentance and changing one's ways from bad to good, until the resurrection of Christ at Easter finally grants salvation.

The oldest proof of Fastnacht customs dates from the 14th and 15th century - roughly 600 years after the Christianization of the pagan Germans. Why would a pagan tradition suddenly spring back to life after so many centuries?

The "Germanic" interpretation was first published in the 1920s when mythology and nationalism were already en vogue. Guess who then used, and abused, the Fastnacht as "Germanic customs" in the 1930s... If people were aware that they are repeating Nazi ideology, they'd be more careful about the interpretations they use.

Posted by Kathrin_E 17:49 Archived in Germany