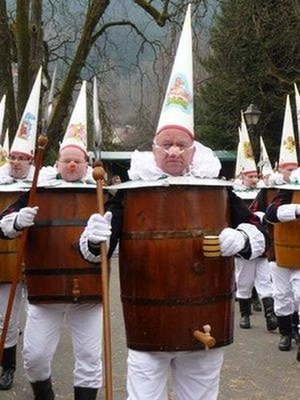 I visited Haslach on a Sunday in late January, a couple of weeks before the High Days. The tree was already up in the square. People in strange dress assembled around food and drink stalls and bands playing. The streets were decorated with colourful flags. There seemed to be something going on. 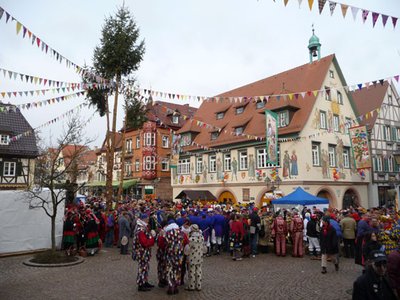 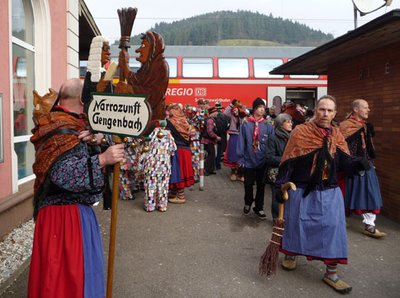 The train station was also packed. More people in fancy outfit emerged from the Regionalexpress and marched into town. Here they still showed their faces but they were carrying scary or funny wooden masks. 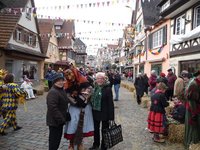 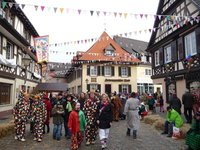 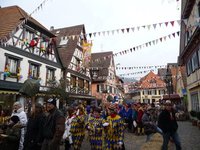 The jester guild of Haslach were celebrating their 150th anniversary this weekend. They invited guilds from the region and also from farther away for a big meeting. Many were staying for the whole weekend of more or less nonstop festivities, others come for the day. The main event of the meeting was the parade on Sunday afternoon with some 5,000 participants. 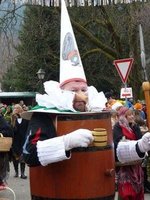 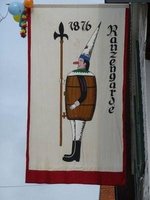 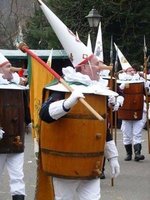 The Ranzengarde is Haslach's most unique jester group... Ranzen translates to satchel in high German but is also a local word for a man's big belly. The Ranzengarde relates to a story (legend?) from some war in the middle ages when the warriors had no armour and used barrels instead. The participants wear a wine barrel around their body, a high pointed hat and a very long wooden nose. Each of them carries a halberd and a little mug.
The barrels have a tap at the front - I think the association one imagines automatically is intended. ;-) However, from this tap they pour wine, the barrel contains sufficient supply for the carrier. Sometimes they even offer a sip to someone among the spectators. 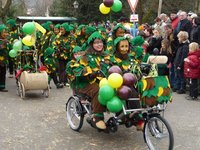 Haslach was named after the hazel tree (Hasel), which shows in the town crest. Unsurprisingly the hazel tree also modeled for the creation of a jester figure, one of the guild's main types. The colours of the hazel tree - green, brown and yellow - show up in the Häs of the Haselnarro. The fabric is cut in the shape of leaves. A large hazel leaf covers the head. They come in all sizes. Grown jesters wear a wooden mask, small kids don't. The Haselnarro carries a stick with bells and woodcarved hazelnuts attached to it. 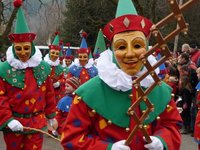 Schellenhansel is a young figure in Haslach's Fasent. The figure was created and first presented in 1994, based on a narration which mentions „Hansele juming along the streets of Haslach“ in the late 19th century. In the meantime there are about 50 of them in the jester guild. The Häs comes in two combinations of colours, either red and green or red and blue. Some of them carry extending scissors to tease the spectators by taking their hats. 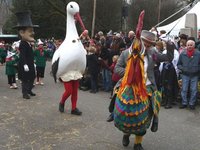 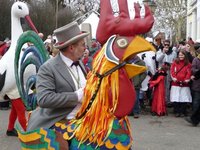 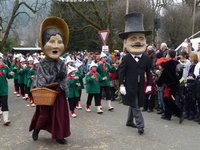 Four large individual figures march at the beginning of the parade. The Gullerreiter (Cock Rider) is a fake rider: a person walking on his own feet, carrying the birg body with fake rider legs. Cocks have the reputation of being s*xually ... active and this connotation is intended. A cock rider is, for example, also part of the Fastnacht in Rottweil and Wolfach.
The result is following on the cock's heels... The stork is said to bring the babies. The Stork in haslach carries a baby doll in his beak.
The two birds are followed by the Big-Headed Married Couple, both dressed in 19th century Sunday best. 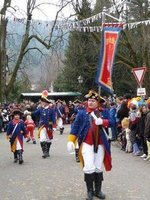 No carnival without a parody on authorities. While many guilds have one single jester policeman, Haslach has a whole squad. It is lead by the Büttel (bailiff, beadle), the guy in blue uniform with the big bell. He does not only lead the parade but he has an important role in certain guild festivities. The police squad, named Bolezei in local dialect, consists of six policemen. Their green uniform was designed after a mural in the guild's favourite pub. Armed with sabres, they guarantee 'law and order' during the Fasent, a task which is not to be taken too seriously.
Making fun of government and authorities includes having a jester army. The uniforms mock the military of Napoleon's times, but also the citizen's militia. Haslach's jester military owns a canon which they take along to happily fire salutes during the parade. Hold your ears if they stop and load it in front of you...

Posted by Kathrin_E 00:13 Archived in Germany

There are a few different ways to add a map to blogs on TP .. I think a map to show the various locations would be a nice addition for your blog.

Did you get advised by TP?

Thank you;-) No, I received no notification, but I saw it on the Highlights page. - I had already been thinking of a map, but it seems to me that a map can only do routes, it does not allow just pinpoints without connecting lines between the places.Or does it? A route would not make sense here.