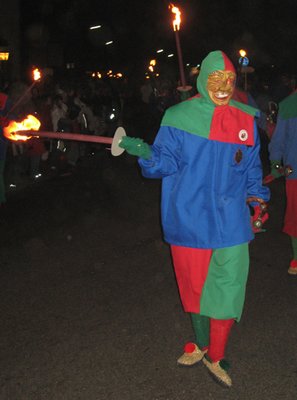 The village of Oberwinden in the Elz valley is one of many nice villages in the Black Forest that won't be described in Rick Steves and other Five-Star-Sights-Only tourist guidebooks. If you want to spend a quiet, relaxing holiday away from mass tourism you need to look for this kind of places.

It is quiet for 364 days per year, to be precise, but one night Oberwinden becomes the centre of the universe (i.e. the Elz valley): on Carnival Saturday - simply because it's the only place in the surrounding whose main Fastnacht event takes place that day. 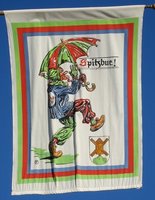 Situated next door to Elzach, one of the oldest and most traditional centres which I have already described, Oberwinden is well connected to the Alemannic Fastnacht. The local carnival guild was, however, only founded in 1954. Since many villagers used to work as waggoners in the past, the founders developed a funny figure that, if you apply a little fantasy, refers to this occupation. The Spitzbue („Rascal“) wears a costume in bright blue, green and red and a laughing mask with a hook-shaped nose. The umbrella and a whistle in the shape of a pipe are essential accessoires. The Spitzbue wears straw shoes - an old but dying-out local craft. One sock is green, the other red, same with the gloves. The colours of the pants and the hood are equally divided.

Like most villages Oberwinden will be decorated during carnival season. Rows of little flags and light bulbs in the guild's colours - blue, red and green - will be hung across the streets. Whoever owns a Spitzbue flag will put it up at their house. These flags are on sale in the local shops before carnival. The flag depicts the local Fastnacht figure, the Spitzbue, and the village's coat of arms. 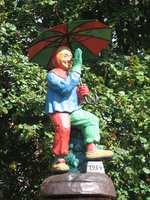 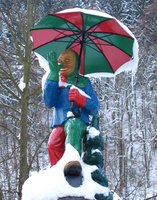 The Spitzbue is represented on the fountain in the main square all year round. woodcarved Spitzbue on top braves ice and snow as well as summer heat...During the High Days the Jester Tree is put up by the fountain. 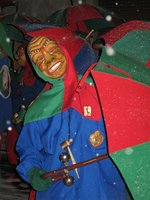 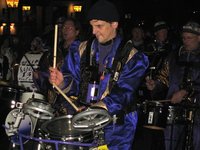 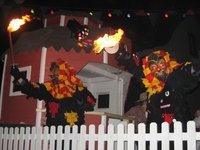 The night parade on carnival Saturday and the following street party is the biggest event of the whole year in Oberwinden. Since they are the only ones who have their main Fastnacht event on Saturday, guilds from the whole valley and beyond will come and join the night parade. Adult participants carry torches. The street lamps are turned off for more effect. Groups and companies turn tractors and trucks into carnival wagons, and everyone comes from near and far to party. Garages, sheds and cellars are turned into street bars operated by local clubs and shops, the whole village is one big party ground. This involves a whole lot of drinking, noise and mess (not my piece of cake, to be honest. I know that I am boring, LOL!) 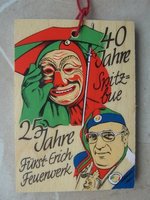 As soon as the Saturday night parade has reached its final destination next to the train station, the whole valley stands and stares up to the sky waiting for the loud BANG that announces the start of the big fireworks. The „Fürst Erich Fireworks“ are an essential part of Carnival Saturday. „Fürst Erich“ used to be the big sponsor of the Oberwindener Fastnacht. Since the late 1960s he has been paying for the fireworks and supporting the guild financially in many other respects. I have only just learned that Erich died in March 2015. I do not know this full story - he was not even from Oberwinden but somehow fell in love with the place. Erich made quite some money in his business and decided to sponsor the local Fastnacht guild, who in return nobilized him to „Fürst (Prince) Erich“ - that's the name everyone knows him by. The main square of the village where the Spitzbue fountain has even been renamed „Fürst Erich Square“. I have met him - of course he enjoyed being the star, but he was generous, down-to-earth, fun and really nice and loved drinking beer with whoever was around. The 1994 badge of the guild depicts a (very favourable, he is in fact much older than shown here) portrait of Fürst Erich.

The parade in the afternoon of Carnival Sunday (14.00? not sure) hardly sees any participants from outside the village, as the neighbouring places will have their own events going on. The Spitzbue guild is mostly represented by the children. Groups from the village dress up and prepare small carts. The mayor and his wife dressed up as pigs were worth seeing. (Otherwise I'd rather suggest going to next-door Elzach to see the Schuttig parade.)

Fastnacht rules from Thursday to Tuesday. On Carnival Thursday the guilds everywhere take the keys of the town hall from the mayor who loses his power during the High Days. 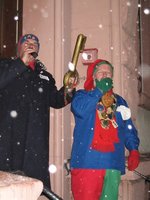 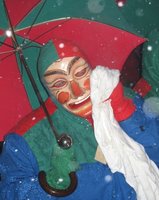 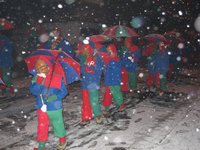 Tuesday evening marks the end of the Fastnacht. The Zunftmeister, the master of the guild, hands the oversized key back to the mayor in a short ceremony which is then followed by the Burning of the Spitzbue. 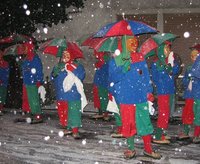 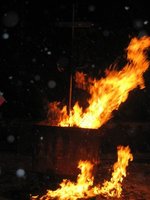 In front of the town hall the Spitzbue assemble for their last parade, all carrying white handkerchiefs: Bläre un Jammere erwünscht - crying and whining wanted. In Fürst-Erich-Platz a straw doll in a fake Spitzbue Häs is burnt. Its death in the fire symbolizes the end of the Fastnacht. The evening and night, however, are still big party time in in all watering holes of the village. 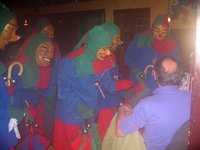 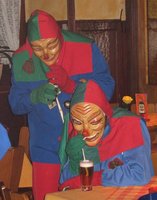 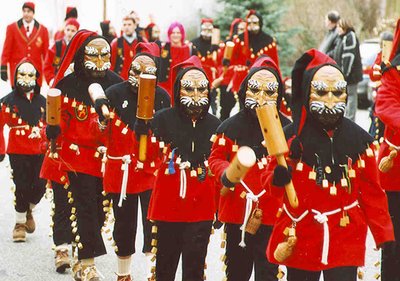 Neighbouring Niederwinden, the other half of the municipality of Winden in the Elz valley, has a Fastnacht tradition of its own, of course. The main parade here takes place on Saturday afternoon (3 p.m.), many groups and trucks stay and party during the afternoon and then move over to Oberwinden for the Saturday night parade.
The Narrenzunft of Niederwinden has created the figure of the Schindelejokel. The making of wooden shingles (Schindeln) is a traditional craft and profession in this village, a typical tool was picked as the jesters' attribute. The mask with the walrus moustache is said to resemble the face of a certain old man who used to be some kind of 'original' in the village. The Schindelejokel guild is always participating in the Saturday night parade in Oberwinden. 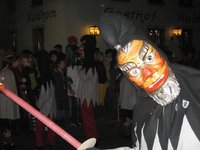 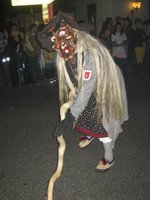 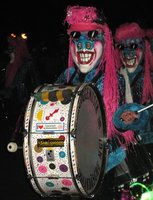 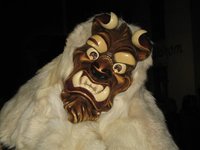 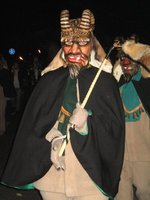 Posted by Kathrin_E 07:48 Archived in Germany