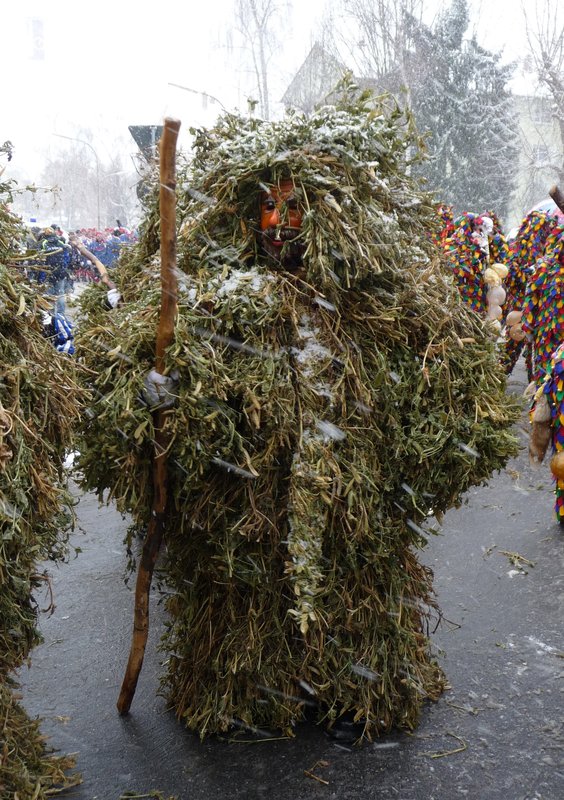 Singen am Hohentwiel is known for three things: 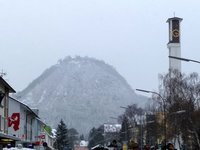 1. its location in the Hegau, a landscape with steep rocky hills that are in fact the leftovers of extinct volcanoes, many of them have the ruins of medieval castles on top. The one next to the town is named Hohentwiel.
2. its Fastnacht and the Hoorige Bär („Hairy Bear“).
3. Maggi. This is a spice similar to soy sauce but a bit stronger in taste because it contains taste enhancers, so you use just a few drops. A bottle of Maggi can be found in almost every German household. The factory is situated next to Singen's train station and impossible to overlook.
Otherwise Singen is a modern, mostly post-war town. Not much to say about this place. Since I was only six when I climbed Hohentwiel for the (so far) only time in my life, and since advertising spicy sauces is not allowed here, let's discuss the carnival... 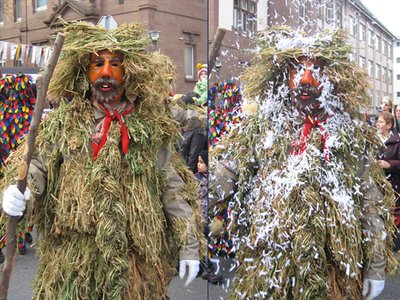 I have so far visited twice. Once I got to see the regular parade on Carnival Sunday. In 2010 I visited for the 150th anniversary of the local guild, which was celebrated with a jester meeting and a parade of some 60 guilds from near and far.
The main parade of the carnival weekend in Singen takes place on Saturday at 2 p.m. It is organized by the town's largest and oldest guild, the Poppele-Zunft. Many other guilds and groups from Singen and surroundings participate. Confetti attacks are very common in Singen, just as elsewhere. However, I have never anywhere else seen the kids in the crowd bring bags of confetti to throw on the jesters. Among the kids it also seems common and acceptable to spray shaving foam on each other, preferably into the hair. I noticed a level of bad manners among kids and youths in the crowd that I have never experienced at parades in other locations of the Alemannic Fastnacht.

The local salutation is „Hoorig!“ („Hairy!“), referring to the Hoorige Bär , as is the local verse. It makes no sense, and it isn’t supposed to... 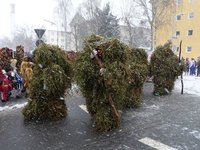 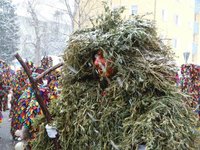 The Hoorige Bär (Hairy Bear) is Singen's most characteristic Fastnacht figure. He belongs to the species of the Straw Bears. Originally there used to be only one of them but the group has grown, it is limited to 12 bears now.
The material is pea straw. Unlike most other straw bears, however, the guy doees not have to undergo the uncomfortable procedure of being wrapped and tied in straw before every parade. The pea straw is sewn onto a fabric suit that can be put on and off more easily. 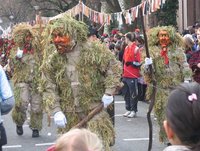 The 'bears' are most impressive at the beginning of the season when they look three or four times the size of the guy inside (estimated). Towards the end the straw has notably thinned out. The straw suit has to be remade every year. 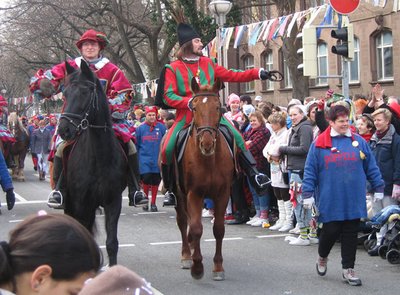 Poppele , the rider wearing red and green, is the central figure and namesake of in Singen's largest and oldest jester guild, the Poppele Guild. He is accompanied by several groups in different costumes - riders, historical personnel, the Hairy Bears, and other Häs groups. Poppele is a legendary figure, who once upon a time lived in Hohenkrähen castle. His real name was Popolius Maier. He was the nobleman's representant in the castle and in charge of both the armory and the economy. As Popolius was by no means a nice guy, he was cursed to become a ghost after his death. The Poppele ghost, however, loves playing pranks but is never mean or harmful. Lots of legends tell about people he fooled but then gave a rich gift to. 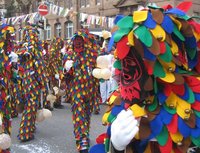 The Blätzlihansel wears a Häs made from little pieces of fabric in five different colours, and a textile mask. This kind of costume with masks that are made from fabric, not wood, is typical for the Bodensee region. 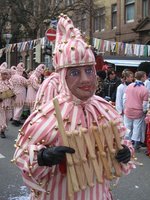 Schellenhansel is a jester in candy colours with little bells all over hood and jacket. They are equipped with extending scissors. This figure dates back to the 19th century but was forgotten for some time until it was revived in the 1930s, forgotten again, and revived again. The Schellenhansel Häs is worn by women only. 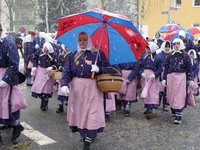 Rebwieber, the vintner women, another entirely female group. They recall the women who used to work in the vineyards on the slopes of Hohentwiel. 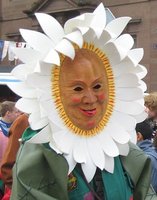 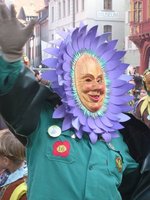 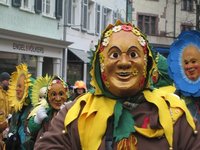 Several smaller, younger guilds join the parade. Blumezupfer (flower pickers) are a newer local guild from Singen. Some masks are flower heads, the clothing is a green gardener's working suit. Others have their heads covered in many small flowers and wear a brown suit with more flowers. 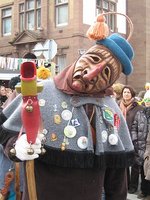 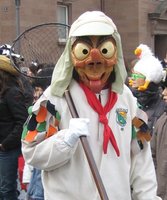 The jester guild Buronia from Singen’s suburb Beuren an der Aach has two main figures: Groppestecher (a fisherman) and Muckeschöpfer who is catching mosquitoes (instead of fish) with his net. Groppen are small fish that hide under the stones at the ground of streams. The fisherman impersonates a very poor farmer who had to catch these fish to have food for his family. A tell-tale about the Beuroners claims that, when they settled down in the wetlands, they believed the mosquitoes were bees and tried to catch them for the honey, hence the Muckeschöpfer. 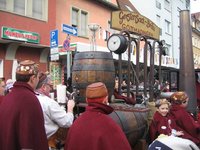 The beer brewers belong to a guild named Gerstensack (barley sack) from Gottmadingen, a village on the Seerhein - the short piece of Rhine river that connects Bodensee and Untersee lakes. They have a cart with beer barrels and distribute beer to the spectators. Unfortunately not to everyone but mostly to the big men... *grumble* 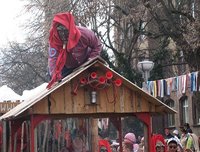 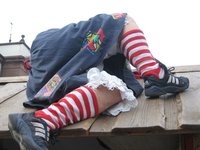 The witch guild of Heilsberghexen from Gottmadingen takes along a little hut on wheels. It serves as prison for caught girls.
Have you ever wondered what witches wear underneath...?

Picture gallery of the parade 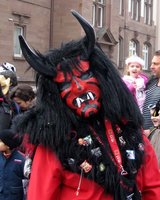 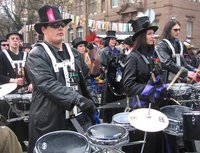 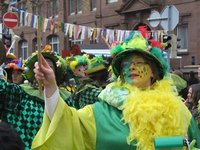 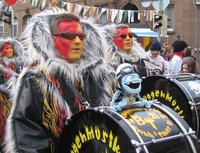 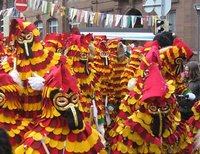 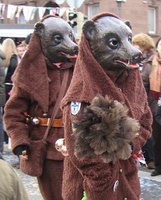 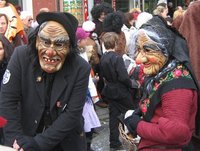 Posted by Kathrin_E 01:21 Archived in Germany