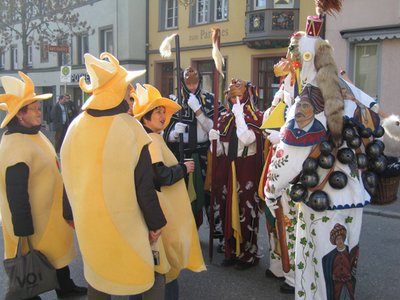 When talking about carnival in Germany, people think about the "big 3" on the Rhine - Köln, Düsseldorf and Mainz – in case they know that there is more than Cologne. The Fastnacht in the Southwest, however, is much different from the silly and noisy carnival of the Rhine cities. Traditions are much older, in some towns masks and costumes have been the same for centuries.

The carnival is the eve of the Lent. Before the time of repentance and prayer begins that finally leads to Good Friday and Easter, there is a period of celebrating and feasting. On the Rhine it is called Karneval, in Bavaria there is the term Fasching, in the Southwest the old term Fastnacht is in use. The word refers to fasting and Fastenzeit, the Lent. Hence it is deeply connected to the catholic calendar (and not a remnant of pagan Germanic spring rituals, although people keep telling you that it is because they don't know where that interpretation derives from). For a strictly limited time the dark powers - devils, ghosts, witches - are allowed to awaken and play their mischief. 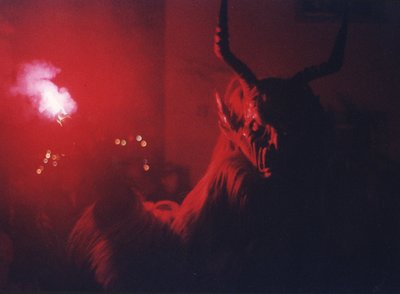 What does this lead to in practice? The climax is a big parade through the village or town. Of course, there is partying in the streets and pubs that involves the consumption of large quantities of alcoholic beverages. But there is more to it than just silly fun. 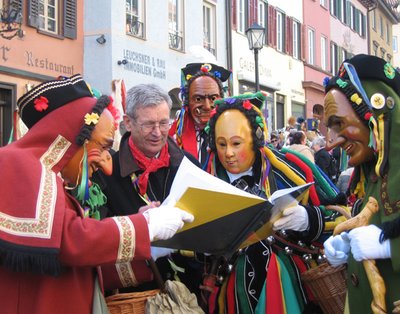 Being a jester involves making fun of authorities, and the chance to speak openly and tell unpleasant truths. Under the mask the jester won’t be recognized and can say what he likes to say. (A fellow club sister of mine used to be a former minister in the government of Baden-Württemberg. She told me how she once visited the carnival in Rottweil, where a a masked jester approached her and told her loads of details about life and work in her ministry, so he surely must have been an employee, but she did not recognize him.)

Posted by Kathrin_E 17:27 Archived in Germany