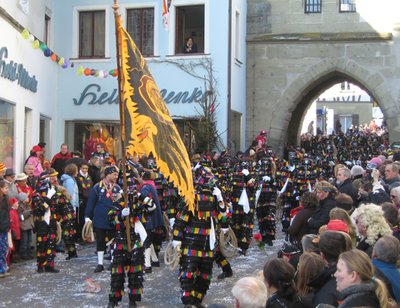 Überlingen is one of the centres of the Alemannic Fastnacht, the regional variety of carnival. These activities date back to the 15th century. Carnival feasts were first mentioned in 1474, in 1496 the city council published a law that ruled customs like wearing devil costumes or receiving the carnival cakes. The carnival guild (Hänselezunft) is proud of its tradition, which is one of the oldest in Baden-Württemberg. Überlingen is a member of the Viererbund. 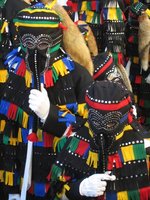 The mandatory costume („Häs“) of the guild is the Hänsele. A white overall is covered with rows of black fringes, every third or fourth row in the sequel of colours red-green-yellow-blue. The Hänsele does not wear a wooden mask like most other Alemannic carnival types but a mask and hat made of the same material as the clothing, with a long trunk-like nose ending in a tassel. The fox tail at the back of the head and the white handkerchief at the front are as essential as the long whip, the „Karbatsche“. A white shirt and black tie, black shoes and black socks are required to be worn underneath the Häs. No white socks please!!! 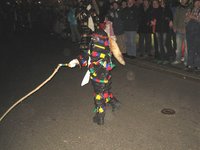 The Karbatsche is a whip that consists of a very short handle and a rope up to 5 metres long. It is used to perform and to create noise, but never to hit people. Creating loud and rhythmic cracks requires both physical strength and technique. The boys in Überlingen learn the use of the Karbatsche from a quite young age, the guild even organizes lessons. 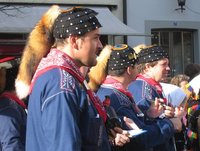 In the afternoon of carnival Saturday the kids are having a competition, which takes place in Hofstatt square (Sat 14.00) and is fun to watch. The youngest participants are five years old, the oldest 18 - of course they compete in different age groups. The kids do not yet have the easiness, elegance and power of the grown-up masters, but they prove that they have practised well. The strict judges give points for the technique, loud and regular cracks, the position - both feet have to stay on the ground in the same spot. The correctness of the Häs is also taken into consideration. Points are taken for white socks instead of black ones, shoes in other colours than black, a missing white handkerchief etc. Changing the whip from the right to the left hand and back gives bonus points. 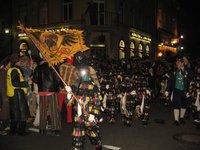 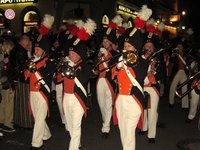 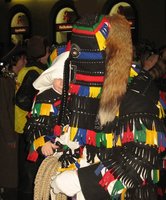 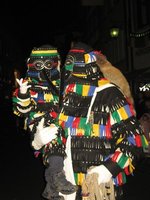 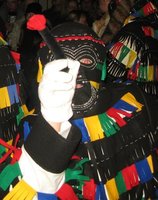 Saturday (20.00) is the big night when the „Hänselejuck“, the night parade of the Hänsele guild, takes place in town. The Hänsele parade through the streets at night. Red bengal fires illuminate the old town. The parade begins near the train station and then leads through the old town. The Stadtmusik band plays the traditional marches and waltzes. Ladies, you may even be invited to dance with a Hänsele.
The Saturday night parade ends in the square named Hofstatt, just below the town hall, with music and a lot of whip-cracking. As soon as there is enough space the Hänsele will have their whips out. The bands are playing, and even the Parents of the Guild will dare a little waltz.

A second parade takes place on Sunday afternoon (14.30). This time it's not only the Hänsele guild but also other guilds and groups from in and around Überlingen. In addition to the alemannic guilds in their Häs, small groups dress up and make fun of current events, politics, society in town.

The two most important personalities in the Hänselezunft are the Parents of the guild (Narreneltern). Both are elegantly dressed, the Mother in a long 19th century dress and golden bonnet, the Father with a high hat and tail coat. During the Sunday parade they ride in a horse-drawn carriage. The Mother is always impersonated by a man. 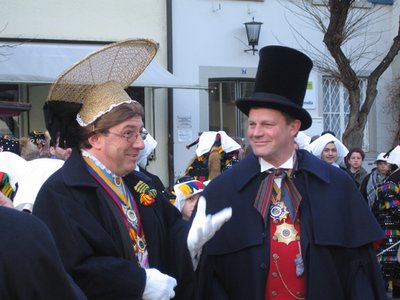 Not only the Mother: All Hänsele are males. Girls and women are not allowed to become members and wear the Hänselehäs. The legend tells that some girls who tried were thrown into the fountain - in their clothes if they were lucky.

The women of Überlingen found a solution to this problem. Women have long organized their own carnival events. In 1995 two sisters founded the Guild of the Lions (Löwenzunft) and created a new Häs, which derives from the red lion in the town's coat of arms. The Lionesses, who are all impersonated by females, have since then become a regular part of the Sunday parade. The young girls in the Löwenzunft do not yet wear the wooden mask, instead they have their faces painted individually. IMHO they're even prettier than the adults. 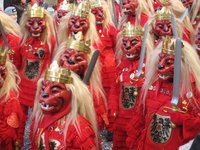 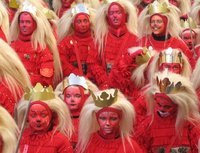 Posted by Kathrin_E 11:13 Archived in Germany