Rottweil: The Capital of Alemannic Fastnacht 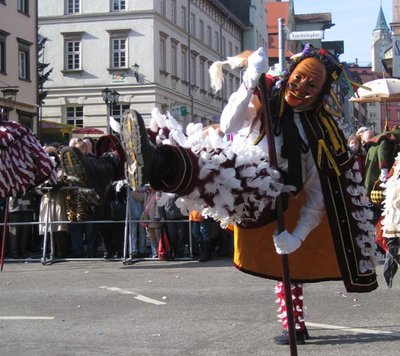 If there's any alemannic Fastnacht that's widely known and even shown live on TV, it's the Narrensprung in Rottweil in the morning of carnival Monday. Rottweil's fame is justified. So far I have never seen more precious and elaborate masks and costumes anywhere else. In addition to the five main types of Narrenkleider (costumes, there are a couple of single figures and the remarkable groups with the horses (Brieler Rössle).

As soon as the bell on the black tower tolls eight, the Narrensprung parade starts. Spectators have to get up early. On Monday morning the town will be overrun by tour buses, accommodation has to be booked very very well in advance.
There is another Narrensprung on Tuesday morning (again 8.00) which is just like the one on Monday, and on Tuesday they're even doing another parade in the early afternoon (starting at 14.00). Hence my advice is: See Rottweil's Fastnacht on Tuesday instead of Monday. There are much less visitors in town, and accommodation from Monday to Tuesday is easier to get. I'd recommend staying overnight, being out and about in time and finding a good spot to watch by 7.30.
The jesters emerge from the gate of the Black Tower and parade down Hauptstraße, the main street. Beyond the main crossing the participants take different routes through the narrow back streets to Hochbrücke, the bridge southwest of the old town, where the parade is reformed. The second part leads through the Hochbrückstraße to Friedrichsplatz. If you stand in Hauptstraße, move and find a new spot for the second part as soon as the whole parade has passed, so you'll be able to see it twice. 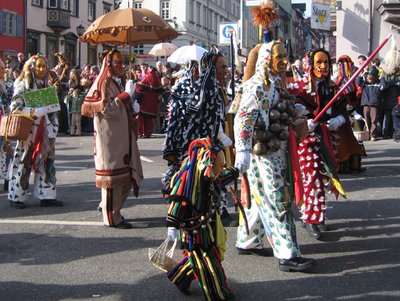 The majority of jesters wears one of the five „Narrekleidle“. There are hundreds of examples of each type. The all follow the same rules, but since each of them is individually made, they are all different in details.

BISS: A wide mouth with bared teeth, big nose, cock feathers and a fox tail on the head, these are the characteristics of the Biss, which is mostly worn by men. Both Biss and Gschell carry heavy metal bells on leather belts round their body. The Biss also carries the leather „Narrenwurst“, a sausage-shaped utensil to tease spectators with.
The white clothing shows exquisite symbolic paintings. The themes of the pictures follow strict rules. For example, the headcover has to show portraits of Turks. The flowers, the personages, the ornaments etc. - everything has a deeper symbolic meaning.
Note the little rhombic mirror attached to the mask's temple. The mirror has long been associated with jesters: First, the jester is someone who looks at nothing but his own image and not at the Lord (theological interpretation). Second, the jester is the one who shows others their reflection in his mirror, i.e. tells them unpleasant truths. 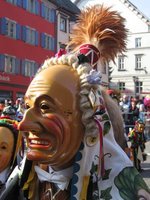 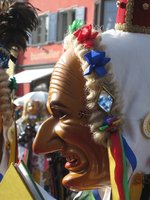 GSCHELL: The Gschell is a more feminine variety of the Biss and often worn by women and children. The painted pictures on the clothing show the same topics. Instead of the cock feathers the Biss has, three fox tails are attached to the head. Both Biss and Gschell carry bells on leather belts round their body. 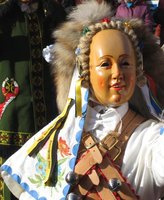 SCHANTLE: The Schantle are the well-behaved gentlemen and ladies among the jesters. According to the movements of many, this costume seems to be preferred by older people (just a guess). The elegant 19th century waistcoat and pants aren't complete without the parasol. Exquisite damascene or embroidered fabrics in subdued colours are used for the Schantle costume. Schantle, Gschell and Fransenkleidle carry baskets full of goodies. „Gutsle“ are given to everyone who is able to sing at least one of the traditional verses. 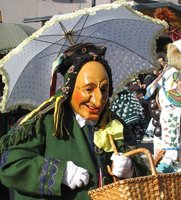 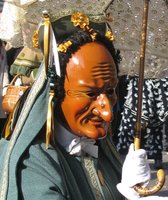 FRANSENKLEIDLE: The Fransenkleidle wears a corduroy suit which is covered with colourful stripes made of short wool threads. The combination of colours seems to be personal choice since there are many different varieties. The general appearance is very baroque. This costume is often worn by women and children, even very little children who are just old enough to walk. 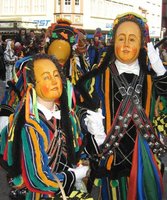 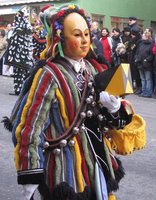 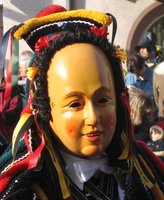 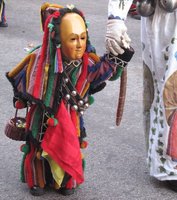 FEDERAHANNES:
The Federahannes is the „naughty boy“ among Rottweil's jesters. The clothing is covered with white feathers, the mask shows protruding teeth and a rolled chin. The costume comes in either dark red, blue or green. He carries a metal pole to which a cow tail is attached at the top end. The pole serves for two purposes: teasing the spectators - no worries, the cow tail is clean and perfumed -, and performing the Narrensprung after which the whole parade was named. The technique of the jump is more or less the same as pole vault: Pole on the ground, jump and throw feet up in the air. 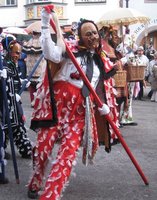 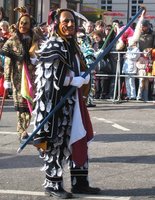 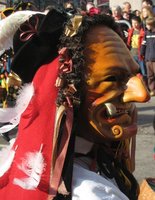 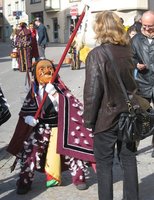 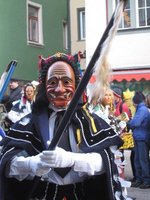 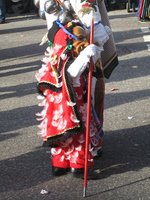 Then there are a number of other figures which have their place at the beginning of the parade. The first to emerge from the gate are the BAJASSE, children in yellow and black harlequin costumes. LANDSKNECHTE (Lansquenets) on horseback and on foot keep everything in order. The bands are also dressed as lansquenets. This is a reference to Rottweil’s status as free imeprial city. LANGER MANN (Long Man) walks with the second group of Bajasse. He is tall enough to look into the windows of the first floor. I haven't exactly figured out the construction but it looks as if there is one person walking underneath who holds a long pole with the head on top.
The NARRENENGEL (jester angel), another singular figure, is not actually an angel. He recalls a religious brotherhood, the Engelsgesellschaft (angel society), of wandering artisans who traditionally took an important part in the carnival celebrations in former times. The Narrenengel carries a plate with the city's coat of arms and the inscription: „Niemand zu Leid, jedem zur Freud“ (To no one's harm, to everyone's joy) - the motto of Rottweil's Fastnacht. 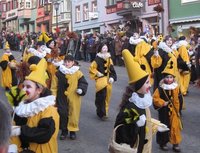 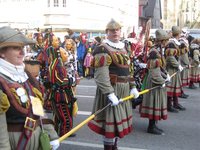 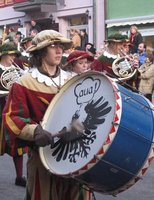 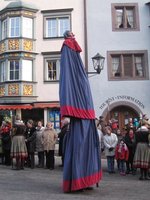 GULLER, the cock rider, is another singular figure. Like the Rössle he is a fake rider, the person is walking on his own feet. The Guller hides in the crowd of the jesters and appears all of a sudden to tease the female spectators. The cock is a symbol of sexuality. That's how this figure is meant to be understood. Look at the lecherous expression of the mask... 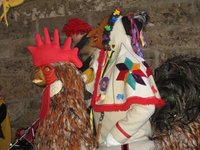 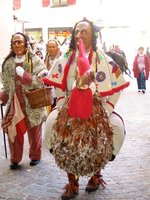 BRIELER RÖSSLE are my favourite figures in the parades. They always come in groups of three: one horse rider led by two drovers with whips, which they use excessively to hit the feathers on the rider's head. Each rider carries at least one spare set of feathers to substitute them if necessary.
Luckily the rider doesn't have a real horse! He has to walk on his own two legs. The „horse“ is just a construction that the „rider“ carries round his body. There are six or seven Rössle groups at the beginning and the end of the parade. The horses' heads are tiny and look a bit misshaped, but if they were bigger they would get caught in the ropes all the time.
All the riders' masks have this strange gaze. While in all other masks the complete eye is open, the riders' masks only have small pupil-like holes to protect the person's eyes from the whipcords. The riders' eyesight is extremely limited through these masks, they are almost blindfolded. Because of that each of them is lead on two ropes.
Between the parades the Rössle groups visit the town's butcher shops. There they are given sausages, which are tied to the horse's harness. Luckily horses are vegetarians... 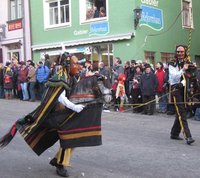 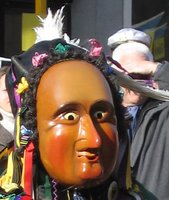 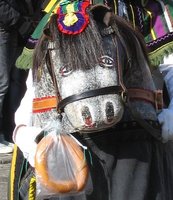 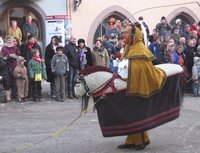 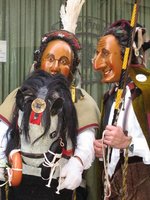 Heischeverse: Verses to sing
The jesters are generously distributing sweets - but not entirely for free. If you want some you have to sing a verse in Swabian which makes more or less sense, but don't worry about that... The most popular ones are these two:

Narro, kugelrund,
d' Stadtleut' sind wieder alli g'sund
(Jester, round as a ball,
people in town are all healthy again.)

The melody, the same for both, consists of no more than three notes, you'll pick it up easily. Warning: If a jester wants you to sing, you will. They insist and you won't get rid of them. They stand in front of you and conduct with one hand or the leather Narrenwurst (sausage) many of them carry. Just try. In emergency, a la-la-la is better than nothing. Children get thrown a handful of sweets from the basket as a reward for singing. Adults, however, will, after a solo performance, be offered the little box which contains pralines, chocolate and other finer stuff. If this happens, pick ONE piece, and feel honoured.

After the parades the jesters wander around for the Aufsagen - telling the past years' news and complaints to anyone who wants to, or is forced to, listen. Most of them make an album with drawings and paintings to illustrate the stories they want to share. Hidden underneath mask and Narrenkleid one can say everything. Of course they pick their listeners carefully if they have the chance. The town's mayor, for example, will learn a lot these days... 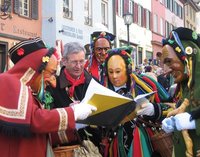 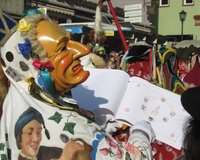 Posted by Kathrin_E 04:22 Archived in Germany