Four of the five oldest, proudest and most traditional Narrenzünfte in Baden-Württemberg have associated in the 1950s and formed the so-called Viererbund, the Alliance of the Four. 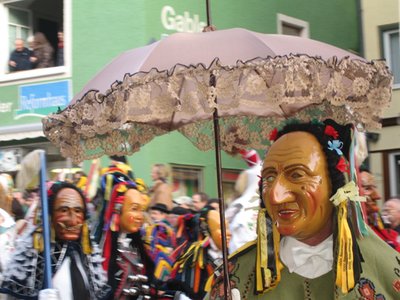 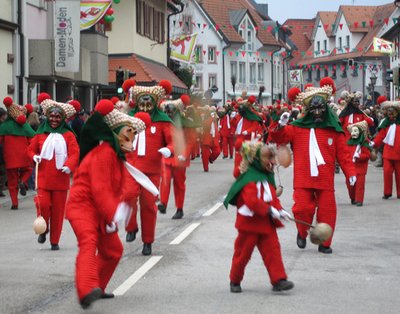 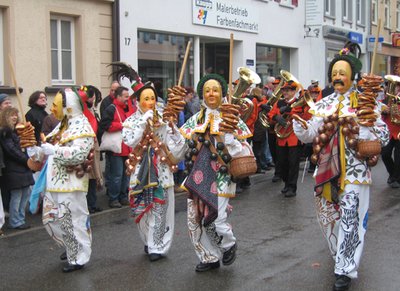 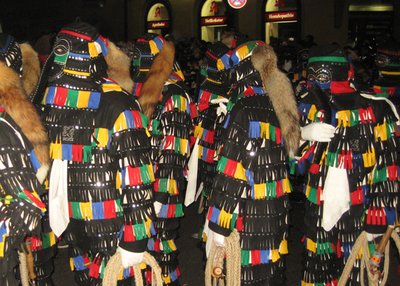 The first association of Alemannic carnival guilds was founded in the 1920s with the purpose of cultivating local customs and fighting restrictions by the authorities. During the following decades more and more new carnival guilds were founded and accepted as members of the association. The historical guilds, however, objected aginst giving these new members the same rights and value. The conflict escalated in 1953 when Villingen, Überlingen and Elzach resigned, Oberndorf and Villingen followed a few years later.
While the Narrozunft Villingen has celebrated its own Fasnet alone ever since, the other four have allied and founded the Viererbund in 1963.

These guilds aim at keeping their historical tradtitions pure and undisturbed. They are considered and consider themselves, half-seriously and half-jokingly, the jester nobility. All costumes and masks are checked and certified by the guild, no one is allowed to join the parade in a Häs that does not have the guild’s badge. Only a certain number of new participants is permitted per year. Members must be locals and capable of speaking the local dialect.
The result are the most elaborate costumes in the whole Alemannic Fastnacht and very special traditions.

Once in three or four years these four guilds hold a big meeting, called Narrentag. Otherwise they won't go anywhere and won't allow any other guilds to join their parades and other events. Since the most recent Narrentag has just taken place in Januar 2017 (in Rottweil – I sadly missed it because I was down with flu), the next one won’t be before 2020 or 2021. A date has not yet been announced. According to the order of the list, it will be Überlingen’s turn to host it.
On the one hand, A Narrentag parade is fascinating to watch because you get to see all four oft hem in one place. On the other hand, there is one problem that makes it less impressive than their home parades, as I noticed when I attended the Narrentag in Oberndorf in 2010. These jesters strongly depend on the interaction with the spectators. They need an audience who know the calls and responses, the chants and verses, the expected behaviour. It is like a board game with sophisticated rules that all participants have to know by heart. When the responding partner is missing, the game won‘t work too well.

Posted by Kathrin_E 02:23 Archived in Germany