Basel Part 5: A Closer Look at the Lanterns 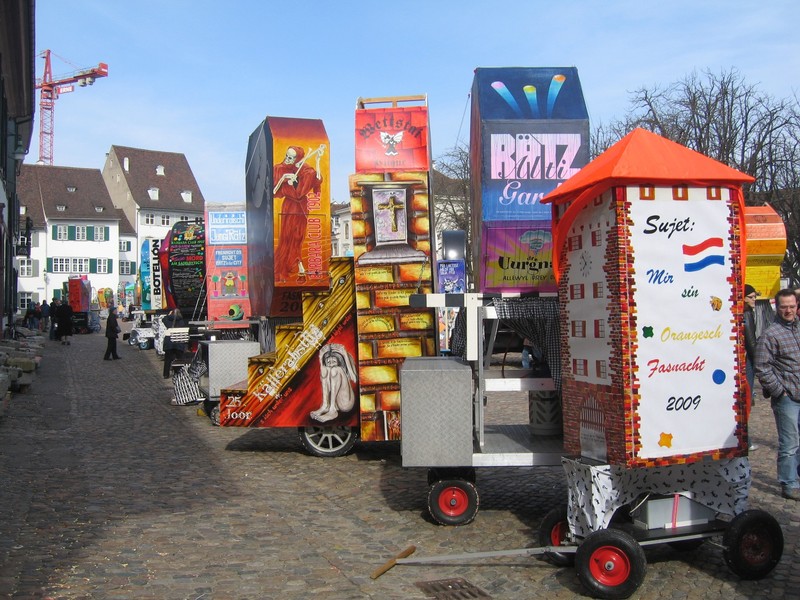 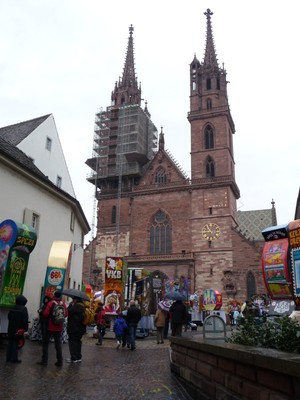 Outside the parades, the big lanterns are on display at Münsterplatz. More or less all Cliquen bring their lanterns up there and leave them standing until they need them again. This is the chance to have a closer look at them.

Treat this like an art exhibition. These lanterns are artworks. Renowned artists in the city take pride in designing them. Cliquen usually have ‘their’ artist with a distinct style. Styles differ widely, but all have in common that the images are rich in details. Often little comments have been written onto them Clique members.

The lantern expresses and illustrates the Clique’s Sujet of the year. They are meant to deliver a message. Be prepared that there are no taboos in the selection of the sujets. No one cares about "political correctness". They show how people actually think. 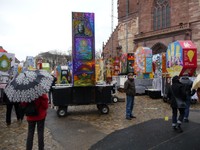 Depending on the respective topic, some are funny, some are satirical and ironical, while others are downright bitter and scary.

There is also an exhibition of carts and requisites. These are on display in a different place, at the arsenal. But I found that of less interest, hence I won’t go into further details. 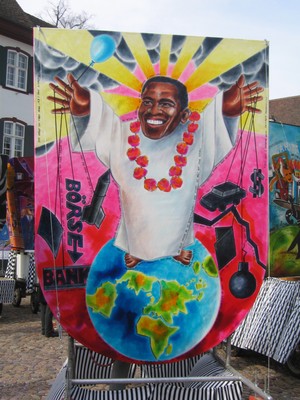 Barrack Obama as the new Messiah 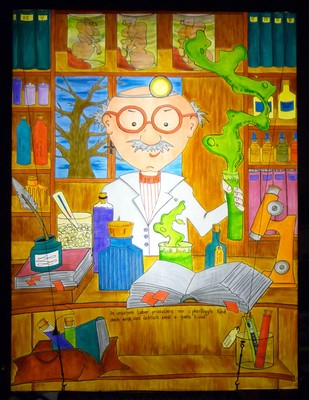 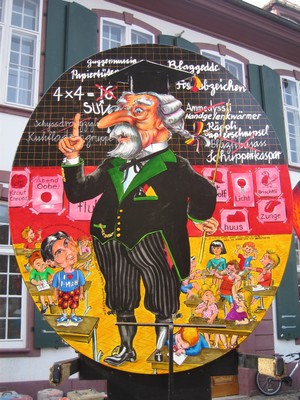 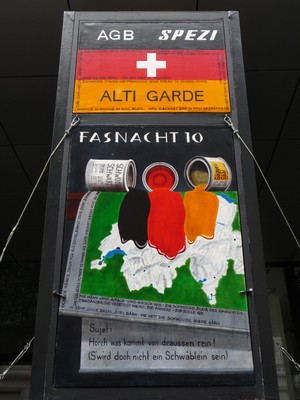 Invasion of High German words endangers the Swiss German language, and a detail of a different lantern also dealing with the fear of us Germans. A widespread topic. 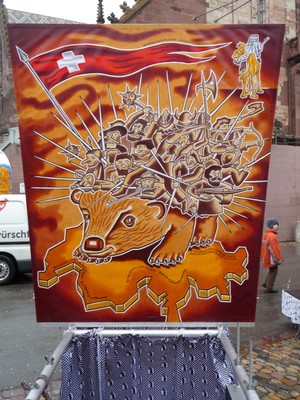 Hedgehog Switzerland: curled up into a spiky ball like hedgehogs do, the Swiss want to protect and defend their country a gainst anything coming in from outside. 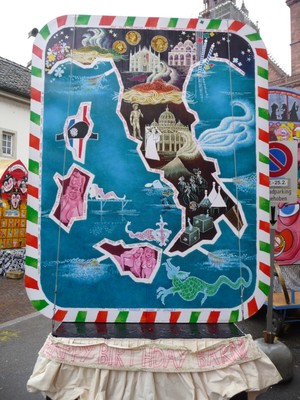 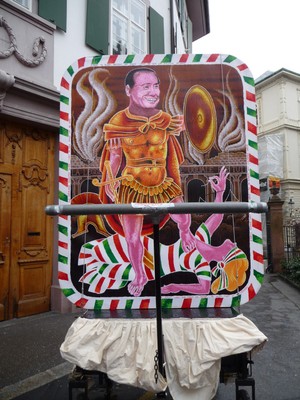 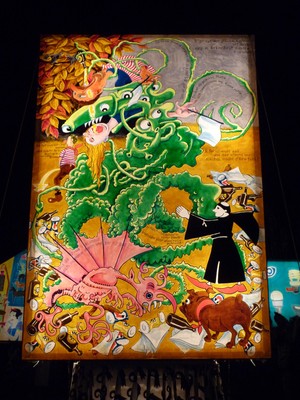 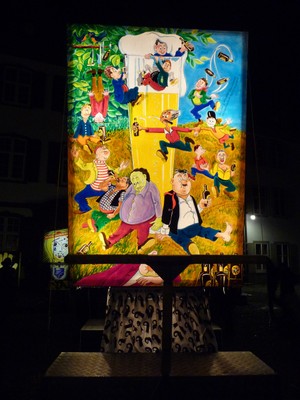 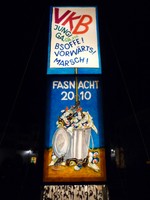 Alcohol and its dangers 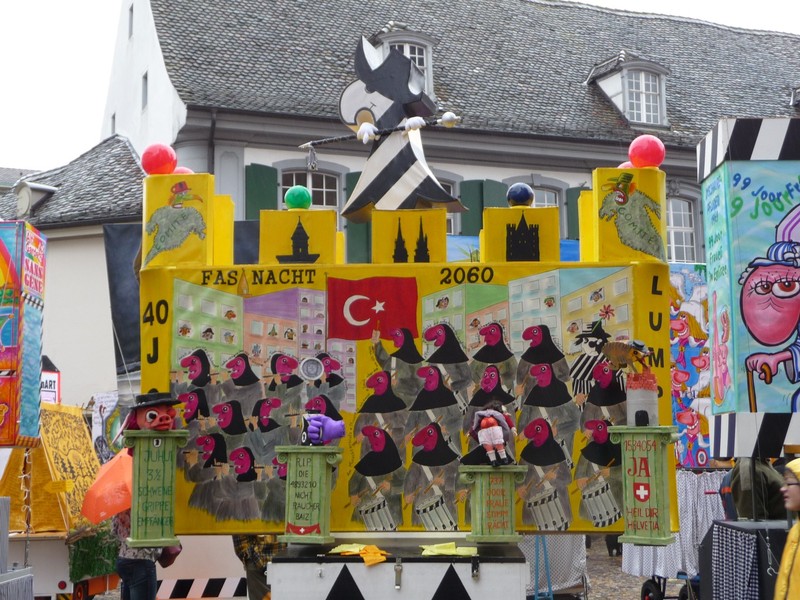 A vision of Fasnacht in 2060, islamized 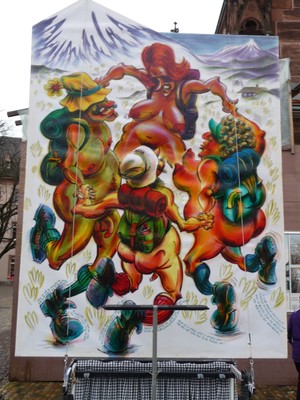 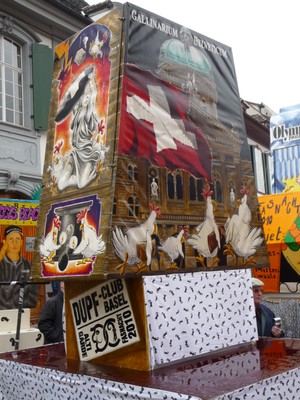 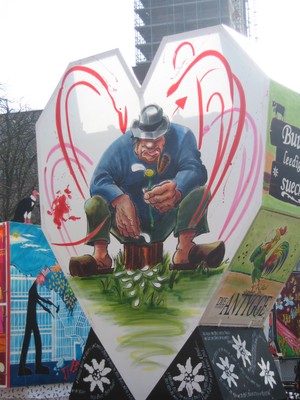 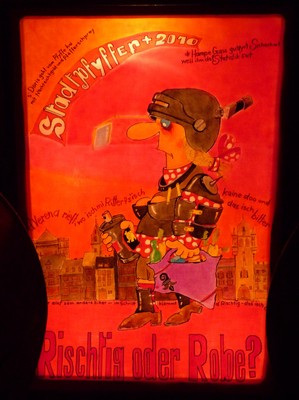 Walking the city at night is dangerous for women 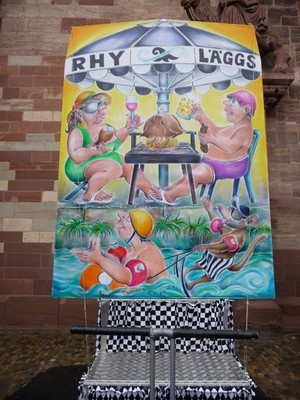 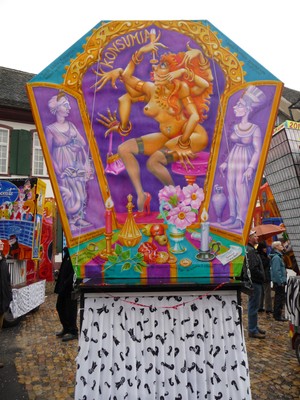 Goddess Konsumia (consumerism - thanks Toonsarah for the correct translation) 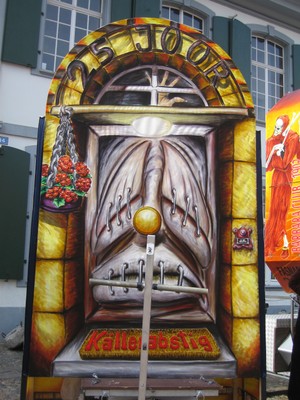 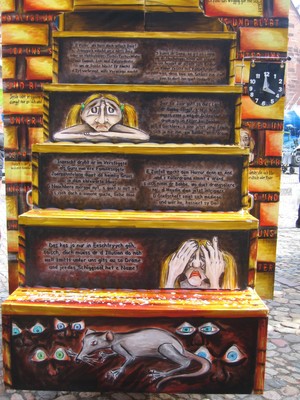 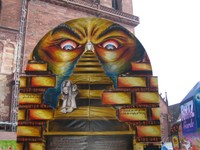 A really tough one.
In 2009/10 this horrible story was all over the media. A father imprisoned his adolescent daughter in the basement of his house for more than 20 years, sexually abused and raped her, she bore him seven children. Three of the kids stayed with her in the cellar prison, the others were taken in as, allegedly, foster children by the parents.
And a mother who would close eyes and mouth, and keep the family secret instead of interfering and helping the victim, her daugher. The opinion of the neighbourhood was more important than the tortures the young woman went through - this aspect is the one they criticize most. They entitled the Sujet, "It is among us and it stays among us."

Fascinating to see the very different inspirations behind the designs of these lanterns - it shows the festival in a new light (pun intended). I remember that horrific story about the father and daughter - it was all over the media here too.

By the way, we use 'consumption' as the name of an illness suffered by Victorian women and girls, what we now know as TB, or in relation to use of energy and power. I believe the English word you are looking for as a translation of 'Konsumia' is what we call 'consumerism' - over-indulgence in buying largely unnecessary items?

Awwww thank you Sarah, of course you are right - I had the feeling that this wasn't right and was was looking for a better translation. but could not find any. I will insert yours immediately.

I like Basel - a beautiful city. These lanterns look very interesting. I'm also familiar with the terrible news story about the imprisoned daughter. So sad.

You're very welcome Katherin. I am always appreciative when German friends correct anything I post

It's a great story with excellent photographs... Thanks, Kathrin!