Introduction to the Alemannic Version of Carnival 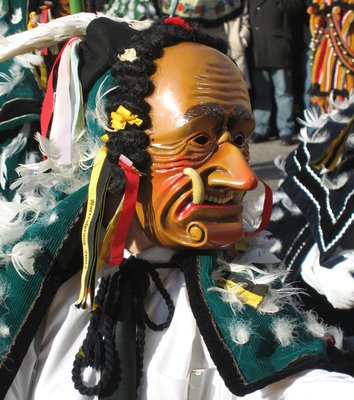 This blog focuses on the "Alemannic Fastnacht", the version of carnival taking place in the Southwest of Germany, i. e. the Federal State of Baden-Württemberg. Roughly speaking, we are in the Black Forest and ist surroundings, Swabia and on the shores of lake of Constance, the southern third of the Upper Rhine Plain, the High Rhine Valley, and some areas in the north of Switzerland. It is called „Alemannic“ with reference to the historical Germanic tribe of the Alemannen who settled in this area after the fall of the ancient Romans. That was long ago but when regional culture, dialect etc. is concerned this term is still in use, be it historically correct or not.

This blog is intended to give you an impression of what is going on during the High Days (and already during the previous weeks) when whole towns and villages all of a sudden seem to go crazy for a strictly limited period of time. I am also trying to explain what is behind those traditions (and clean up some common errors and misinterpretations). Ever since I moved to this part of the country I have been fascinated by these unique traditions which are unknown in my home in the North. There is so much cultural background behind them, and the masks and costumes are so elaborate and amazing.

So we will start with some basics, later on I will present individual locations and their particularities. Thus it makes sense to read the blog in consecutive order. The first 10 or so chapters contain background information and are helpful to understand what the festivals are about. There are so many different traditions and local particularities in Baden-Württemberg's Fastnacht that one life won't be enough to see them all.
And make sure you read the "Survival Tips for Newbies";-)

Enjoy an encounter with strange figures, scary devils and witches, funny fantastic creatures, colourful beauties that come to life for a few short days every year in late winter. 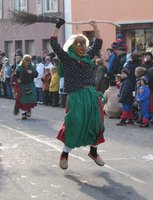 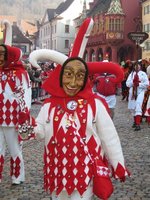 Next Table of contents

Thanks Kathrin for your detailed description of Alemannic Carnival :-))